Bend your brain and see the future 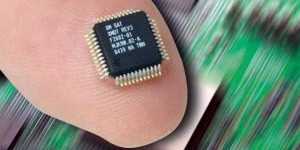 Researchers and technologists are constantly working on developing the next emerging trend that will change the way we live and work.

One such example is the Memristor, a breakthrough that packs some serious potential. The memristor is a new breed of technology that may lead to servers and other devices far more efficient than today’s machines.

Clear your mind so I can explain.

Start by thinking about a water pipe

Imagine a pipe carrying water. The amount of effort required to stop water running through this pipe depends on (a) the diameter of the pipe and (b) the speed at which the water is flowing. This is similar to how a traditional electrical circuit works, and a resistor is the component used to slow down electrical current and voltage.

OK, now imagine if the amount of effort required to stop the water was determined by the amount of water that ran through it in the past, not the present. So even if the water stops flowing it is still difficult to block the pipe supposing that earlier the pipe was rushing with water.

Bending your brain yet?

Introducing the Memristor (or “Memory Resistor”)

The Memristor is a new building block of computer processes. It is considered the fourth fundamental circuit element alongside the resistor, capacitor, and inductor.

It’s a unique kind of resistor circuit that remembers the last voltage that has been applied to it, even after the power is turned off. This is achieved by removing electrons from oxides in the Memristor.

Memristors can make a faster, cheaper, replacement for DRAM, flash memory and even disk drives. By combining memory and storage, Memristors enable what we call “universal memory,” radically increasing computing efficiency, and speed.

Another clear benefit of Memristor-based systems is that they wouldn’t require the time-consuming “boot-up” process that’s necessary today. Imagine a complete data centre able to recover almost immediately from a power failure, a process that takes hours or days today.

But the most valuable applications that Memristor technology enables—petascale analytics, distributed mesh computing and possibly using Memristors as logic devices—are yet to come.

IT manufacturers are taking the lead

Professor Leon Chua first came up with the theory in 1971. He was a distinguished faculty member in the Electrical Engineering and Computer Sciences Department at the University of California Berkeley.

Earlier in the year, HP announced a research project to use Memristors at the core of an architecture it’s calling “The Machine,” which should be ready as soon as the end of the decade. The Machine will use electrons for processing, photons for communication, and ions for storage, and can scale from handheld to data centre size, making it capable of completely replacing current computer architectures.

Thanks to advancements like the Memristor the future is looking ultra-fast.