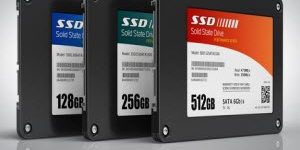 Until recently most PCs and laptops were equipped with Hard Disk Drives (HDDs) to store your computer files. Think of a HDD as similar to DVD – it works by reading/writing data onto a spinning disc that holds your data. Like a DVD, HDDs are “non-volatile” which means the data doesn’t disappear when power is turned off.

Introducing Solid State Drives (SSDs) – a relatively new technology that also stores your computer files, but in a different way to the traditional HDD. A SSD is not a spinning disc. Similar to your USB drive SSDs are a series of interconnected flash memory chips. What differentiates SSDs from your USB drive is the type and speed of the memory – SSDs are much faster and far more expensive.

The proliferation of Netbooks, Ultrabooks and Ultraportables has helped sales volumes of Solid State Drives (SSD) and if you are shopping around for a new PC or laptop you will probably have the choice of HDD or SSD. So which drive is right for you?

The benefits of SSD over HDD

Improved Speed. The big benefit of SSD over HDD is performance. A SSD-equipped PC will boot in seconds, certainly under a minute. A hard drive requires time to speed up to operating specs, and will continue to be slower than an SSD during normal operation. Performance varies depending on model and environment but a 2x speed improvement is typical.

Durability. SSDs have no moving parts so risk of failure is much lower. Heat build-up is minimised and flash-based drives are inherently more resistant to vibration and shock. SSDs are more likely to survive if you drop your laptop bag or your system is shaken about while it’s operating. If you’re rough on your equipment, a SSD is recommended.

Power draw. SSDs are typically more power efficient leading to improvements in battery life when compared to HDDs. They are also smaller than HDDs which is why they are better suited to thinner and lighter Ultrabooks.

Less noise. Even the quietest HDD will emit some noise when in use from the drive spinning or the read arm moving back and forth. Faster hard drives will make more noise than slower ones. SSDs make virtually no noise at all because they are non-mechanical.

The limitations of SSD versus HDD

Cost. Although prices are dropping, SSDs are still far more expensive than HDDs. For a basic 1TB internal 2.5-inch drive you’ll pay about $85 for an HDD but an SSD is a whopping $600 (as of July 2014).

Capacity. SSDs drive space is restricted compared to HDDs. SSDs currently top out at 1TB of drive space but you rarely find Solid State Drives with more than 256GB of storage. Most HDDs are 500GB+ and it’s not uncommon to see systems with 1TB or 2TB HDD storage.

Longevity. SSDs wear out over time because each cell in a flash memory bank has a limited number of times it can be written and erased. However unless you are a video editor you are more likely to discard the system for obsolescence before you start running into drive errors.

Which is right for you?

In summary the traditional Hard Disk Drive is still the way to go if you are limited on budget, you need lots of disk space for your downloads or if you are a video editor.

Solid State Drives are great if you are always on the road or if you demand the best performance out of your system. You’ll pay more but many think the extra expense is worth it.