The future of cars 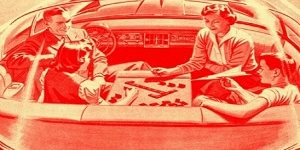 Self-driving cars. Are they just around the corner?

Over the next five years we are going to see amazing leaps in the technology that drives our cars. As a bit of a techno-geek I got excited by a recent infographic I saw on Mashable (www.mashable.com). This gives you a glimpse into the not too distant future of automobile technology.

The technology inside cars is accelerating, and this explosion of innovation is expected to get even more profound in the coming years. This infographic shows the near-future of car tech, revealing what might happen in the next five years.

We’ve tested many of today’s techno-cruisemobiles, and they are loaded with gee-whiz features. The day we let the car automatically park itself while we sat behind the wheel — watching it being turned by what seemed like a ghost — was the moment we realized that self-driving cars can’t be that far off. This infographic tells us that self-driving vehicles are right around the corner, set to hit showrooms by 2017.

So the technology might be ready, but will drivers be willing to trust it enough to sit and read their iPads or put on makeup on their way to work instead of driving? (Wait, aren’t they doing that now?)

Meanwhile, take a look at this infographic that shows you the road ahead for car tech. Then let us know in the form what features you’re most looking forward to, and which ones you’d rather avoid.